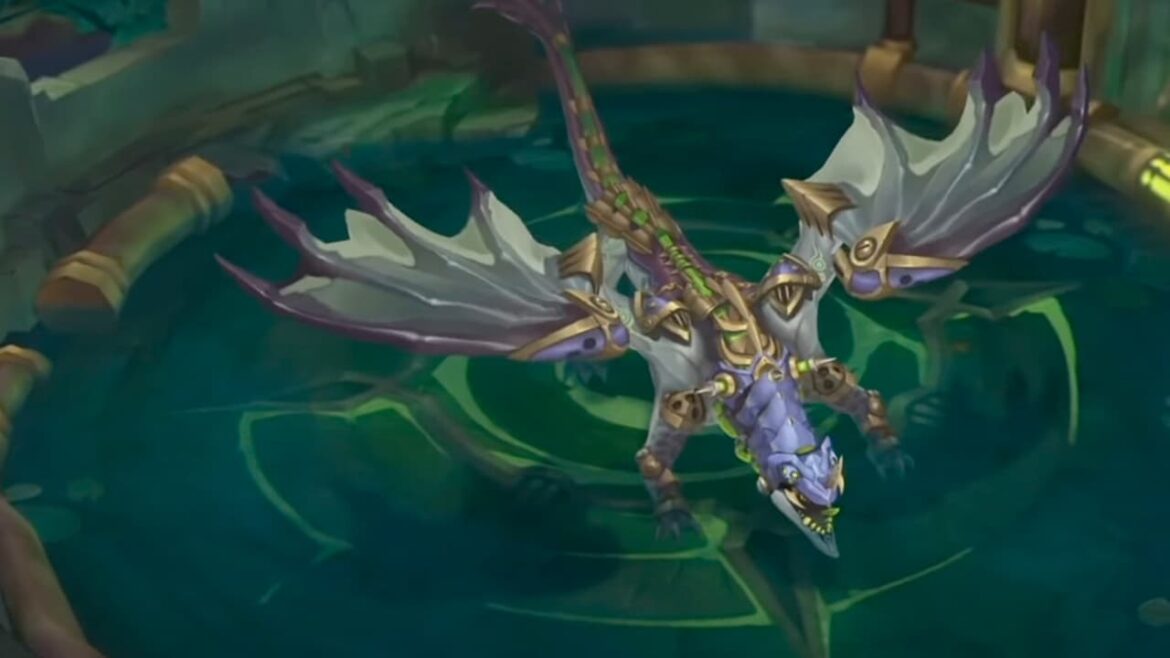 S11 was a total gamechanger. It introduced us to Mythic items, changed up how promos work, and gave the shop a total “glow up.” As always, the next season has big things in store for us too. Here, we’ll break down the biggest changes coming to the Rift in S12.

Yep, Riot Games has blessed us with two new dragons to slay (or befriend, if you’re an Ivern main). While all the dragons change up the Rift in some way or another, these scaly fellas take it to the extreme – they introduce completely new mechanics and more playmaking opportunities. These dragons have been designed to expand “thematic possibilities,” and create “new terrain features that contribute to unique matches and alter how the game plays out after the map transforms.”

The Hextech Dragon provides an ability haste and attack speed upgrade (5% attack speed per stack and 5 ability haste). If the Hextech dragon is the soul, it gives the team that lands the killing blow a “chain lightning slow” buff. The buff makes your next ability or attack deal true damage, and it also slows enemy units, making chasing down slippery opponents a breeze.

This Dragon also transforms the Rift into a Bard main’s dreamland. It summons up “Hex-gates” – like those featured in the Arcane series – all across the map. For those who have not yet watched the bingeworthy LoL show, Hex-gates are portals that allow players to travel across the map quicker.

Accessing a Hex-gate requires a brief channel, which, like a recall, can be interrupted if you get damaged or immobilized.

This dragon’s standard buff gives players increased damage against healthier enemies. While the standard buff is nothing to write home about, the soul buff is a completely different matter: players are revived for a brief moment after they die. In other words, the Chemtech soul gives every team member the Sion passive.

This buff is probably going to be the most infuriating in the game. Just imagine having to kill that 20/1/0 Vayne twice. Yeesh.

But the Riot Team didn’t just get inspired by Sion when making this deadly dragon. They also “did a Viktor” and got inspired by the mad chemist, Singed. The Chemtech Dragon causes gas zones to emerge in the jungle. These gas zones camouflage players and increase their damage against healthier enemies. Regular wards won’t provide any vision – so, support mains, there’s no better time than now to harass your teammates to stock up on Control Wards!

Falling drastically behind in League of Legends usually means it’s game over. Unless the enemy team completely slips up – i.e. the Yasuo runs it down mid 5 times and the jungler forgets what their smite does – all you can do is watch in despair as your turrets fall, inhibitors fall, and objectives get taken.

The new League feature, Objective Bounties, is designed to give the losing team a better chance of making a comeback. When a team falls behind, objectives on the map are given a large gold bounty.

According to Riot, these bounties “are highlighted on the minimap for both teams,” and “if the losing team takes an objective with an active bounty, each of its members will receive Objective Bounty gold.”

The gold bounties on offer can vary. While each objective has a base bounty amount, “these base amounts can increase up to an additional 60%.” The gold bounties will depend on several factors, including gold difference, turret lead, dragons secured, and XP difference.

The base bounty amounts are:

Virtually every season so far has brought with it new items and rune changes, we covered most of them in our League of Legends Runes Guide, so it shouldn’t be a surprise that S12 is no exception. Lethal Tempo and Glacial Augment are getting some modifications, and there’s a new keystone called First Strike.

First Strike is part of the Inspiration line, has a 25 to 15 second cooldown, and offers the following player bonuses:

Riot have stressed that this keystone is “designed for players who want more strategic, long-term output from their runes in addition to an immediate mechanical boost.” It’s particularly great for “artillery champions who can land their spells first,” or “assassins who do their entire damage output within a short amount of time.”

24 items have been updated and there are several new items, including more Mythic items and better legendary options for assassins, tanks, and mages. The new items are Crown of the Shattered Queen, Evenshroud, Axiom Arc, Shadowflame, Winter’s Approach, and Fimbulwinter.

When Will League of Legends Season 12 Start?

The preseason changes have just hit live servers, but the new season is expected to go live in January. Until then, have fun exploring the new changes and remember to buy Control Wards!

p.s. if you haven’t started playing the game yet, jump over to our LoL Beginner’s Guide, it’s a good starting point for new players. If you’re already a seasoned player, it wouldn’t hurt going over our list of recommendations on How to Get Better at LoL.

Editor’s Note: Dear Reader, this is an archived article from our LoL Esports News section published in late 2021, for the most recent news check out our main esports news category.

Overwatch’s Favourite Cowboy Is Getting a Name Change