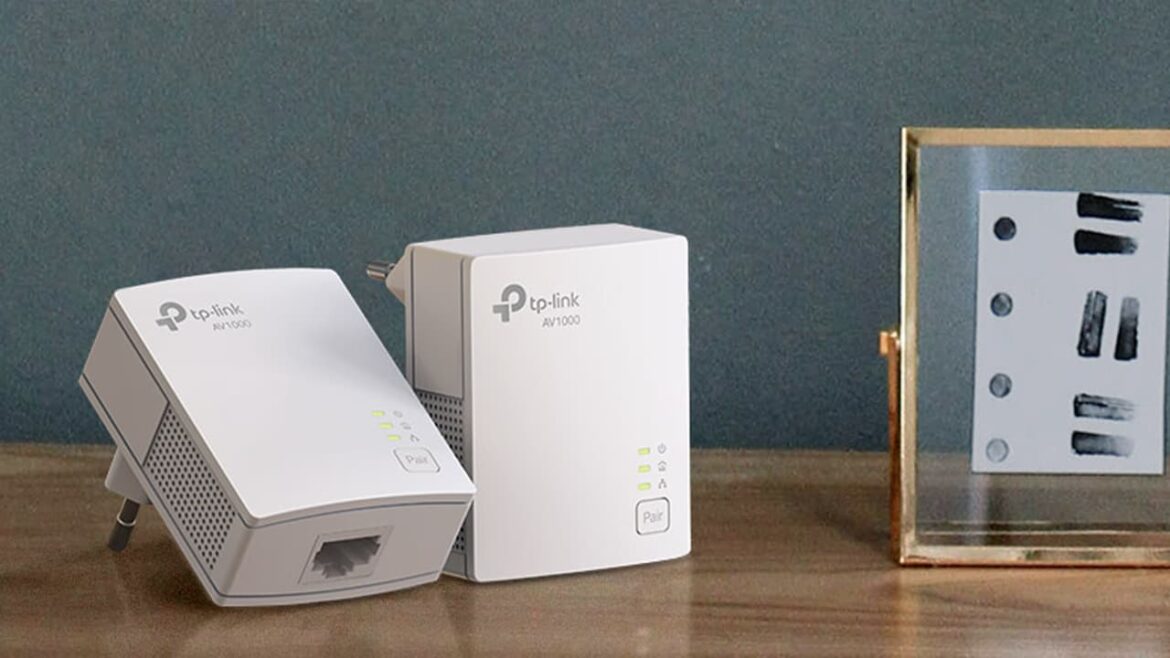 While we live in an era of gigabit internet, insane WiFi bandwidth, and the promise of 5G everywhere, the best online gaming experience is still via the good old ethernet cable. Online games don’t require a speedy connection; even a measly 5Mbps bandwidth will suffice if the signal’s stable and latency’s low. What they do require is low latency and stability and the ethernet cable is still king of those domains.

Today we’re showing you the best powerline adapters you can buy. No matter which one you get, it will improve the stability of your online gaming sessions while reducing lag compared to using a WiFi connection.

As we already said, powerline adapters use AC wiring in your home to expand your internet access, allowing you to have a stable connection in any part of your house, as long as that part features an AC power socket. All you need is two powerline adapters and two ethernet cables, and you’re ready to go.

Do note that the two outlets used by adapters have to be on the same electrical circuit for the best performance. Adapters can work on different circuits but the connection speed will be lower.

You can test whether the outlets are on the same circuit (there are online guides explaining the procedure). However, we don’t recommend performing the procedure unless you know what you’re doing. Also, you have to connect an adapter directly to a power outlet. Hooking it into an extension cord or a UPS doesn’t work.

As for the setup process, it’s effortless. First, connect the first adapter to your router with an ethernet cable and hook it to the power socket. Then, attach the second powerline adapter, pair the two adapters, and connect the second adapter to your PC’s RJ-45 port. That’s it; that’s the whole procedure. As you can see, it’s straightforward and only takes a couple of minutes.

While the setup process is as simple as they get, routing your internet over electrical wires is far from perfect. Depending on the quality of your wiring, you can get lower speeds, increased latency, and decreased stability than a person living in a brand-new house with brand-new, high-quality wiring.

For instance, low-quality wiring in just one room, the one where you keep your router, can mess up the performance of every powerline adapter in the network. Also, low-quality wiring might be why the bandwidth comes to a standstill in one room while reaching full speed in another.

On the other hand, arc fault circuit breakers (AFCI), found in many newer homes, can negatively affect the internet signal or flat-out prevent powerline adapters from routing the signal in the first place. Some reports indicate these breakers can cut powerline adapter bandwidth in half.

Other hidden variables can also affect the quality and speed of the connection. Stuff such as having many high-power appliances connected to the same circuit used by powerline adapters. The adapters are also known to cause issues with audio devices such as speakers and AV receivers connected to the same circuit. Issues such as occasional static noise.

Next, while the simplest to set up and easiest to use, powerline adapters aren’t the best solution regarding wired internet extension options. If your home features a coaxial cable network, you can use MoCA (Multimedia over Coax) adapters to grant wired internet access to your gaming PC. They offer faster and more stable connection but require coax wiring and are more complex to set up.

You should use a powerline adapter if you’re not able to route an ethernet cable directly from your router to your rig and if you don’t have access to coaxial wiring in rooms where you keep your router and your gaming PC. Powerline adapters are also great for gamers whose only two options for internet access include a WiFi router and a WiFi Mesh system.

Powerline adapters aren’t for gamers looking for a low latency, high stability, and high-bandwidth solution. While they offer a dependable connection with lower latency than WiFi, powerline connectors aren’t known for great speed. If high speed is what you’re after, WiFi mesh systems and WiFi routers with 5GHz band support present a better choice.

How Did We Pick the Best Powerline Adapter for Gaming?

If you’re an online gamer in the market for a powerline adapter, you’re probably placing signal stability and low latency at the top of your requirements, and this is what we have also done. Other considerations include the price, connection speed, and extra features that might be handy but aren’t high on the requirement list.

We also considered signal degradation relative to range increase, warranty, and availability. With that said, each of the three powerline adapters featured below is, first and foremost, a great performer capable of delivering low latency internet to your gaming rig.

The Netgear PLP2000 isn’t the absolute fastest powerline adapter on the block, but it does have excellent performance & reliability, as well as great range. While Netgear claims the maximum bandwidth is 2000Mbps, professional and user reviews show that’s not the case.

Maximum speed depends on the quality of your wiring, distance between the two adapters, and other variables. You can expect anything between 35Mbps – 50Mbps to almost reaching 1Gbps if your internet plan allows such high speeds.

This is another confirmation that a metric ton of variables can affect performance of a powerline adapter. The good news is that, when it comes to latency and overall reliability, the Netgear PLP2000 rocks. Virtually all reviews we found online praise the device’s latency and reliability compared to wireless connection.

While being the most reliable and one of the fastest powerline adapters available, the Netgear PLP2000 won’t burn a hole in your pocket. Next, the PLP2000 also comes with handy extra features such as dual 1Gbps ethernet ports on each unit, MIMO technology that offers improved stability and speed, and an additional power outlet on the adapter itself.

Of course, not a single product out there isn’t perfect. The Netgear PLP2000 doesn’t offer any kind of WiFi extending features despite its higher price. Also, units are pretty bulky and will cover the second outlet if you hook them to a two-outlet power socket. Next, the 1-year warranty period is rather lackluster, especially since many other models come with a 3-year warranty. Finally, no fancy monitoring utility might be a downside to some users.

The TP-Link TL-PA7017 is one of the cheapest powerline adapter kits on the market. Despite its affordability and humble specs, it offers excellent stability and low latency. The device is rated for a max transfer rate of up to 1000Mbps, with a single gigabit ethernet port on each unit.

While users have reported speeds upwards of 350Mbps, you should expect an average rate between 50Mbps-100Mbps depending on your router, wiring, and other variables. The good news is that the range of this adapter is quite generous (300 m/984 ft), and the performance is rock solid regarding latency and reliability even over longer distances.

Low price equals no extra features. The TP-Link TL-PA7017 doesn’t feature multiple ethernet ports, WiFi support, or an additional power outlet on each unit. On the flip side, the performance is excellent, the price is super low, and you’ve also got limited lifetime warranty. If you need a no-frills powerline adapter kit that’s affordable and, more importantly, reliable, this is the one to buy.

Last but not least is the Devolo Magic 2 WiFi 6. As you can see from its name, this adapter provides a wired connection and WiFi 6 connectivity. It can act both as your regular powerline adapter and a WiFi 6 extender, and it plays both roles quite successfully.

The maximum rated speed is set at 2400Mbps for the wired connection and 1800Mbps for the WiFi 6 part of the equation. Since the device supports dual band, the maximum speed of the 5GHz band is set at 1201Mbps. With perfect conditions, you can reach speeds of around 1Gbps, but even in less than ideal conditions, you should see bandwidth reaching or going over 100Mbps. If your internet plan supports those speeds, of course.

The Devolo Magic 2 WiFi 6 is also great as a WiFi 6 mesh system but not as great as proper WiFi 6 mesh options. It lacks advanced features, and while it supports 2×2 MU MIMO, it cannot offer the same bandwidth as a proper WiFi 6 router. Still, as a powerline adapter, the Devolo Magic 2 WiFi 6 is a great choice; it’s super consistent and offers a low latency signal, perfect for online gaming. Its most significant downsides are ludicrous price and the unwieldy adapter size.

Are the Speed Ratings Faithful to their Specs?

In short, they aren’t.

While powerline adapters can offer a more stable connection than WiFi and WiFi mesh solutions, their bandwidth is not great. The maximum speed found on the label is often a far cry from what you get in real life. As with most other tech, paper specs aren’t reflecting real-life performance. In the case of powerline adapters, the bonus catch is that virtually anything can negatively affect the performance of a powerline adapter.

For the best performance, we advise using a circuit with as few connected appliances as possible. Next, make sure you’re using high-quality ethernet cables. Also, the circuit you’re using shouldn’t feature an AFCI breaker for the best performance. Finally, your wiring shouldn’t be decades old and prone to short circuits. Still, even with a perfect setup, you shouldn’t expect the real-life speed to be near what’s written on the label.

As long as you’re getting a reliable, low latency signal that doesn’t break or feature lag spikes while maintaining a high enough speed to download games in a timely manner, you’re fine.

Powerline adapters are the easiest way to convey stable and low latency internet from your router to your gaming PC. They don’t offer the highest speed, but the wired nature of the connection equals high stability and low latency, which is all you need for an enjoyable multiplayer experience. Just don’t forget that the quality of your wiring, along with other variables, can massively affect the performance of a powerline adapter.

While not the fastest solution and not without inherent flaws, powerline adapters are great for use cases where you need a relatively fast, stable, and low latency connection that won’t be affected by congestion or physical obstacles. On the flip side, if your home features coaxial wiring, a MoCA adapter might be a better solution since it offers both higher speeds and lower latency on average.