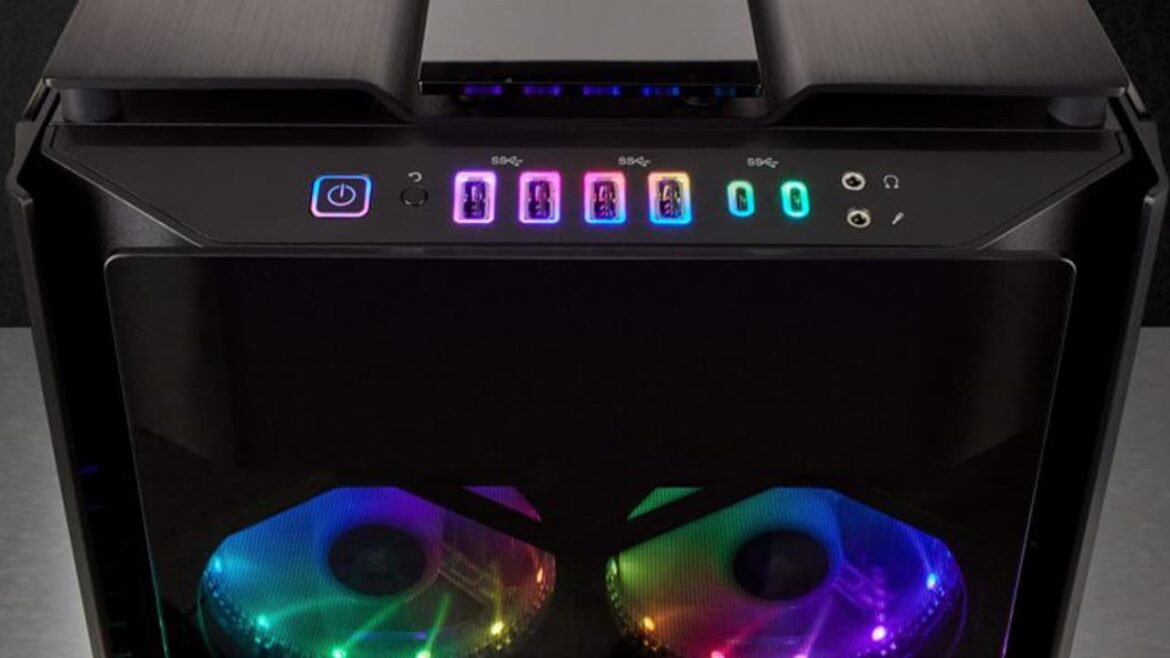 In an effort to create a new fan base, manufacturers brought up an increasing number of desktop computer cases that get equipped with multiple functional features, including mount brackets, vast radiator space, logical layouts, and even drain/fill ports in some cases. As a result, over the past several years, they have been coming up with some truly surprising combinations in their PC cases, and you’re about to see the top five cases that sum the best ones out.

This huge water-cooling PC case is about 697 mm tall, 307 mm wide, and about 693 mm deep. It can house four 480 mm radiators and has 18 fan mounts. Corsair Obsidian 1000D has two rooms for upfront radiator placement. It can accommodate a water-cooling system as small as 120 mm and as large as 420 mm. It features tempered glass doors that allow looking at its inner components.

It can house up to five 3.5″ HDDs and six 2.5″ SSDs. It features an embedded fan, RGB lighting, and telescopic radiator trays. Its triple chamber helps to keep it clean and in order. Among other things, it has a French-door style storage compartment, E-ATX motherboard, and dual-purpose Mini-ITX motherboard tray. The case’s rotatable GPU bracket allows the GPU’s installation both vertically and horizontally.

The Thermaltake Tower 900 is made with a simple modification that can house liquid coolers as big as 280 x 140 mm in its back compartment, a 400 mm graphic card, and a 260 mm CPU cooler.

This case is fitted with a window made of 5 mm tempered glass, allowing its owner to see what’s going on inside of it. It also supports 480 mm and 560 mm radiators for the cooling system and two tank mounts. Thermaltake Tower 900 has other great features, too. For example, you won’t need tools to install it, and it will make your cable routing as simple as ever.

Moreover, this case is compatible with high-end hardware due to its staggering cooling features. It is installed vertically and has an E-ATX platform that features a multi-GPU config, allowing its owner to solve GPU sag issues.

Truth be told, this is one of the best gaming PC cases for liquid cooling systems out there. It is a mid-tower ATX compact case with tempered glass panels and an aluminum carcass that allows its owner to view its entire build.

It features multiple fan slots at the side, top, and bottom for fans ranging from 120 mm to 140 mm in size. In addition, the case can house cooling systems with radiators ranging between 240 mm, 280 mm, and 360 mm in size that can be mounted on the bottom or side to provide your computer with enough air for cooling.

This liquid-cooling case features quite a lot of room for housing dual PSUs and an E-ATX motherboard. It was designed to support high-end graphic cards as big as 420 mm and CPU coolers as long as 155 mm.

This computer case is particularly great for one radiator water cooling system. It also has a standard riser cable that allows the graphic card to be mounted vertically. In addition, it features RBG lighting with its open frame and tempered glass panels on its sides and top, providing an entertaining view of its inner components.

Thermaltake Core P5 allows to put up a custom water loop with a reservoir for the CPU and GPU. It is also a modular case that enables a dual GPU layout and three-way placement layout.

This stunning case can house a liquid-cooling radiator as big as 360 mm and has five slots reserved for fans with extra room for two SSD bays, and most importantly – reasonable pricing.