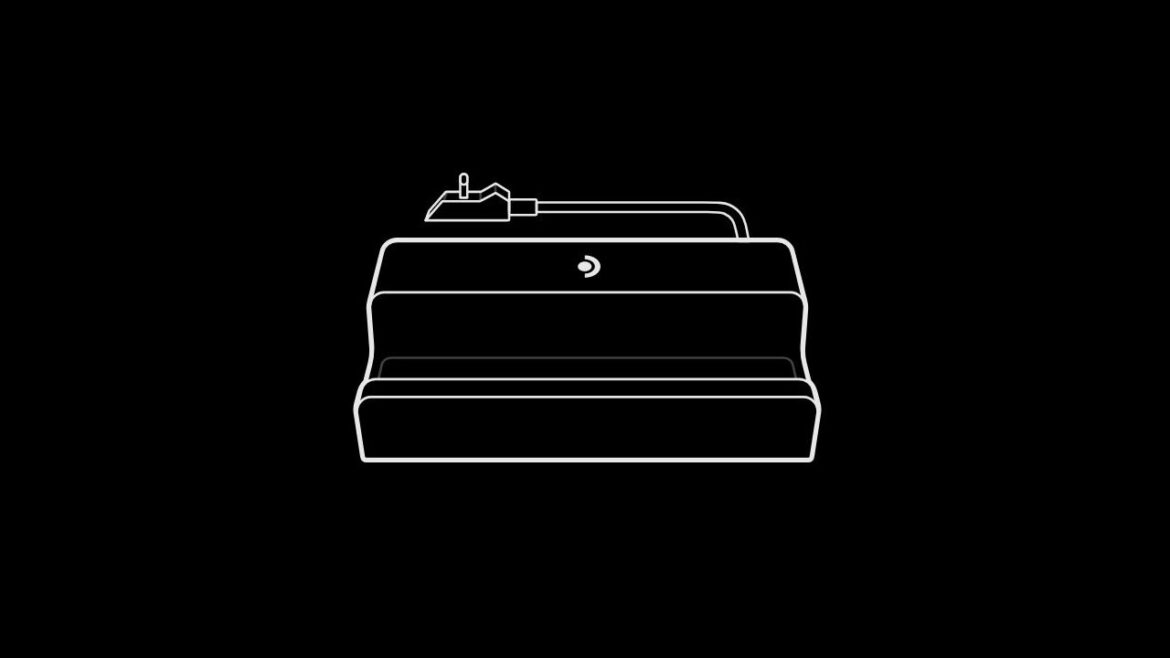 Our Steam Deck dock review unit is finally here, and after a full day of testing, I’m pretty comfortable in saying that the company definitely delivered on their promises, with my only complain being the price. Even if you just glance over the photos in this review, you’ll already see that Valve’s take on a Steam Deck docking station isn’t like any other on the market. But let me jump right up into our Steam Deck dock review to give you all the nitty gritty details and competitor comparisons. 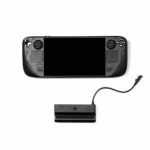 If you can afford it, the official Steam Deck Dock is certainly a good investment. It's not only well integrated in to the SteamOS itself, but also features all the ports one would need for a pleasant couch gaming session.

If you remember my Steam Deck review from a few months ago, I mentioned that the console itself is a chunker, with quite a large footprint when compared to the PSP or the Switch series.

In a nutshell, it’s a USB-C powered dock with various ports.

I vividly remember my past experiences with various third party docking solutions for both Sony and Nintendo’s portable consoles, and those weak docks were just accidents waiting to happen, especially if you have a cat. Luckily, it seems like Valve thought this through well.

To explain it better, the 120 gram Steam Deck dock has a fully rubberized non-slip base, with the same material located at the cradle itself, in a short strip. Thanks to those two features and the angle of the fit, your console will be steady, both vertically and horizontally. 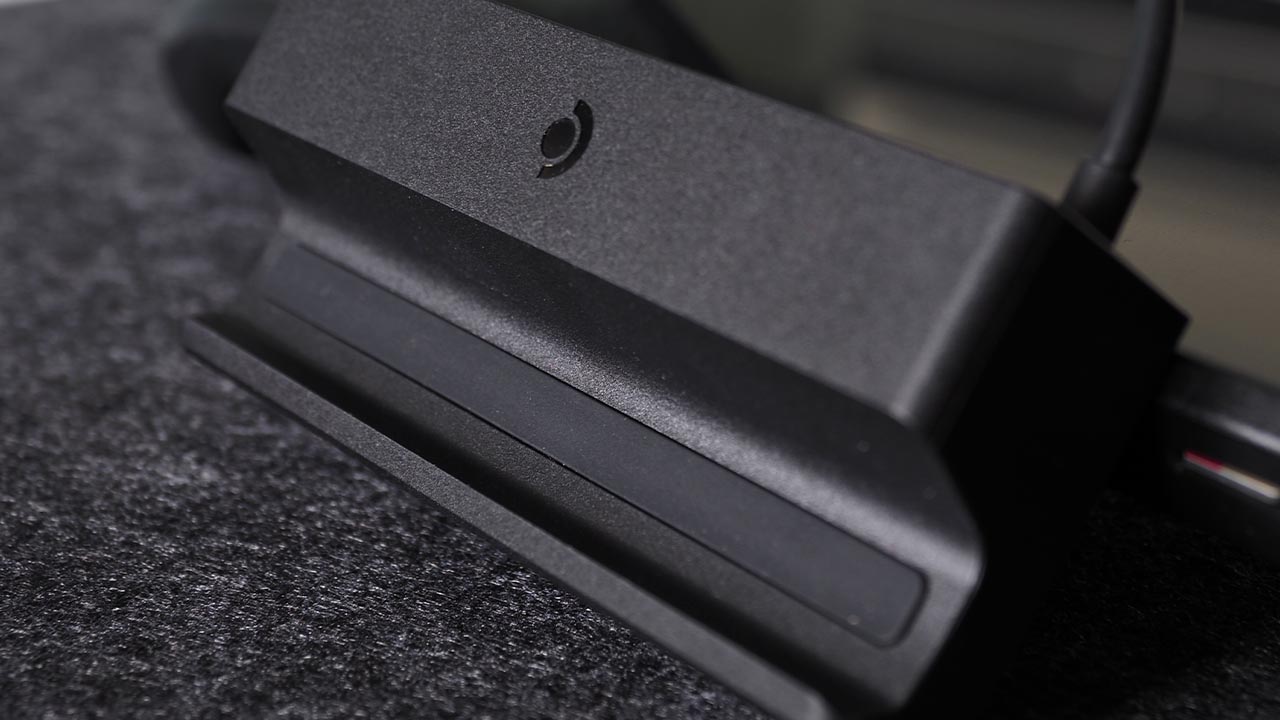 The rubber strip is strong enough to keep your console steady.

The only issue that I found during my review is that some stronger HDMI cables really don’t like to be connected to small and light things, but I’ll get to that soon.

Other than that, the build quality is excellent. You’ll find the same hard plastic cover that you saw on the Steam Deck itself. 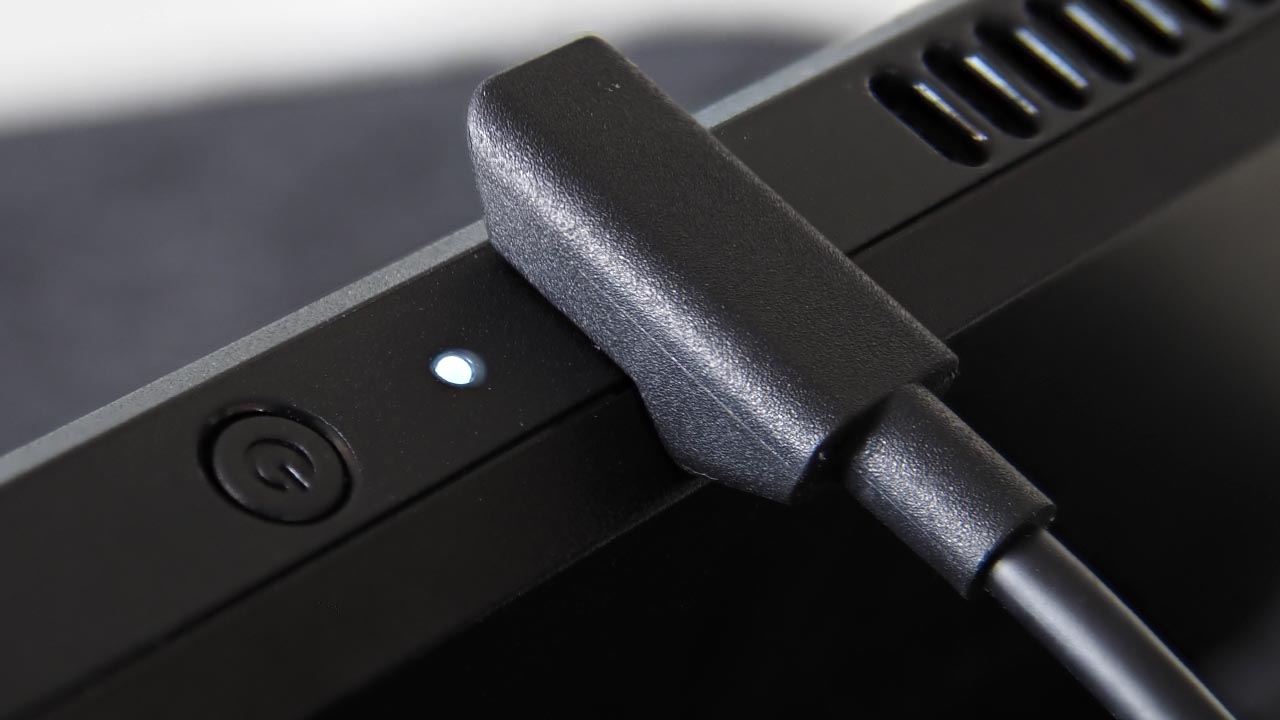 The material and build quality are mimicking the Steam Deck.

Unsurprisingly, the whole dock is molded to fit the console in just the right way, with my favorite quirk being the shape of the charging cable. 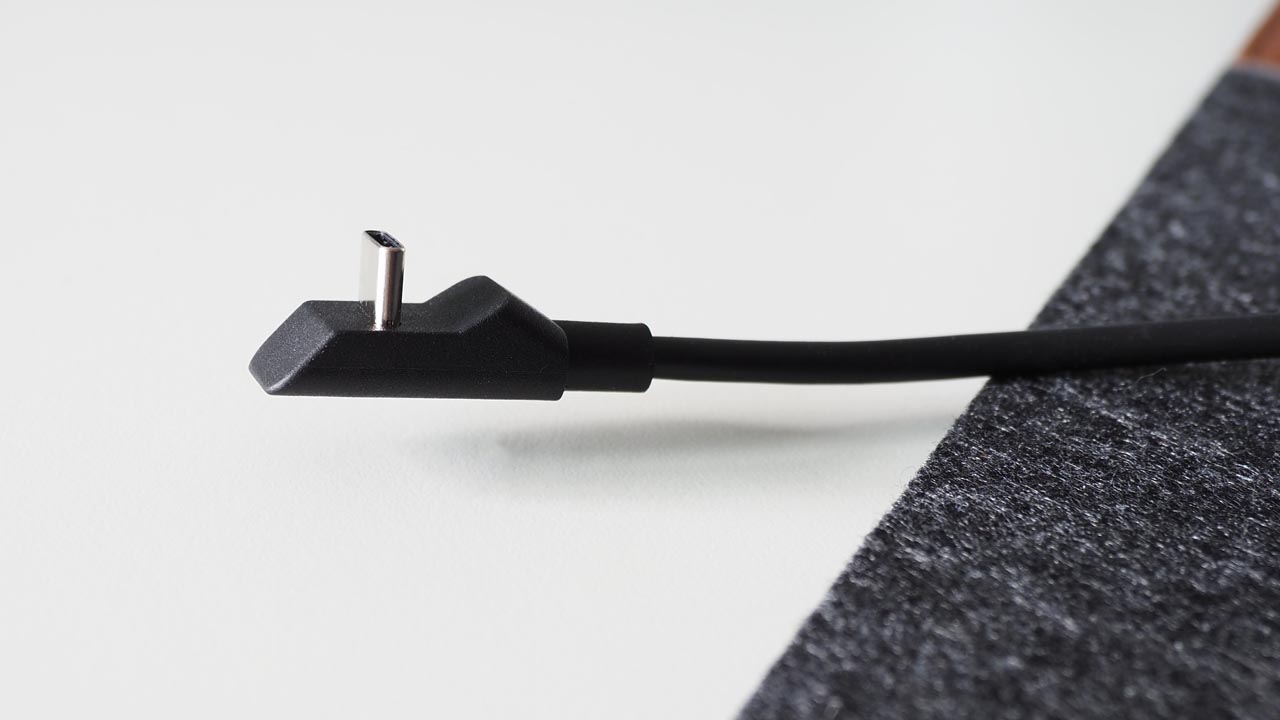 You can see that someone with OCD designed the cable.

The IO’s can be found on the back, and feature the following connectors; three USB-A 3.1 Gen1 ports that operate at speeds of 5 Gbps, one gigabit ethernet port that supports… well, gigabit speeds, one HDMI 2.0 and one DisplayPort 1.4.

The video outputs support both FreeSync and Adpative-Sync technologies, and since the dock is sporting DisplayPort 1.4, it also means you can daisy chain several monitors by making use of Multi-Stream Transport. Theoretically, this means that you could connect a plethora of devices to your Steam Deck, including options of 4k@60HZ and 1440p @ 120 HZ…

Try to keep in mind that this is still a mid-range Linux “laptop”. Although the options are there and are advertised as such, it doesn’t mean that the experience will match the companies enthusiasm about it. 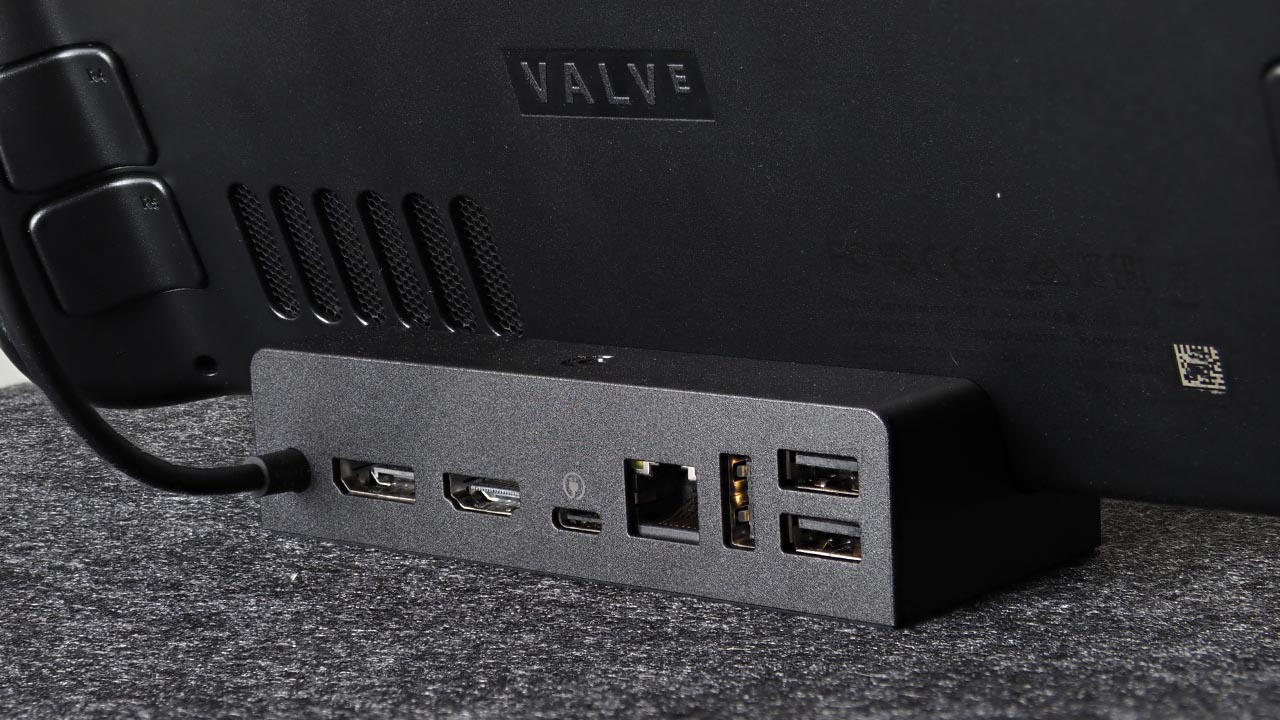 More than enough connectors for your day to day gaming.

Yes, you’ll be able to power a 1440p or 4k display through the Steam Deck dock, but the performance of the games and applications will still depend on how well they are optimized. I’m not saying that it doesn’t have it’s uses, but 120 FPS gaming at 1440p is nothing more than wishful thinking.

What I would rather suggest is that you keep your TV or monitor at 1080p@60 HZ, that way you’ll mirror the experience designed for the Steam Deck with no issues at hand. And since we’re talking about TV’s, this brings me to the topic of hard HDMI cables.

I own a rugged HDMI cable and the hard fat wires of it just played around with the light Steam Deck Dock. Basically every time I would pick up the device, the HDMI cable would lift the 120 grams of weight without any issues. This is why I would recommend to get softer HDMI cables that aren’t as rugged as mine. If you need recommendations, you can check out our pick of the best HDMI cables for gaming.

One pleasant surprise that I had within the first second of my review was the firmware update notification. Since this is the official Steam Deck dock, it’s no surprise that Valve wanted to make the device future proof. Other than that, by offering regular firmware updates, you can rest assured that all of the potential bugs will slowly but surely get fixed. 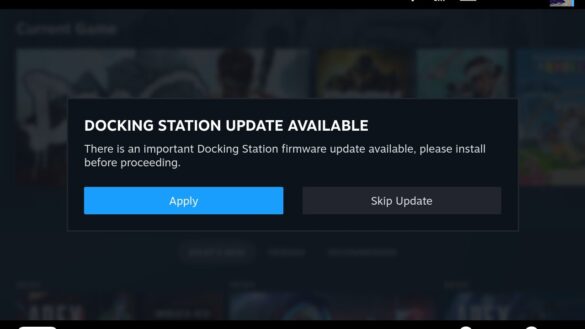 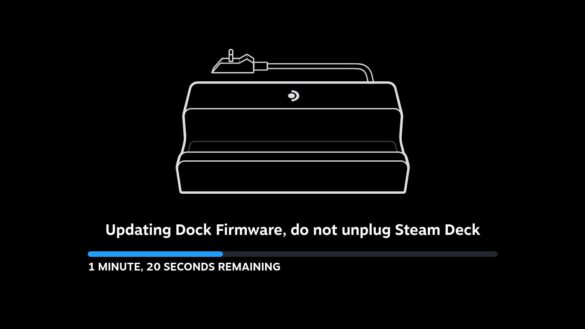 The update process is integrated nicely in to SteamOS and follows the same design language of the console itself, which is definitely a nice touch. This is one of those USP’s that only this dock has, no other manufacturer has such a seaming-less integration like the official Steam Deck dock.

Now About That Price…

I can’t say that the price isn’t hefty. Set at 89 USD in the US and 99 EUR in the EU, the official Steam Deck dock is definitely pricier than most competitors that offer the same IO’s. In my last article on the best USB-C Steam Deck dock Alternatives I went over a few models, and most of them are within the $50 range give or take.

Still, I think this one is worth it. In other words, if you can afford the official Steam Deck dock, you’ll certainly be happy with it.

The design language mirrors the device, integration is spotless, and the performance is excellent. Additionally, availability seemed to jump up and you can get one right now, without any reservation spots or extra long waiting times. If you didn’t already, here’s the order link: https://store.steampowered.com/steamdeckdock

Wishes for the Next Model

Now, although I said that this is currently the best possible Steam Deck docking solution, I can’t say that I’m 100% happy with our review unit.

First, the official Steam Deck dock comes with the same power adapter that you got with the console, the 1,5 meter long charging brick from Chicony.  What use would I have for another charger of the same length? In my opinion it would be much nicer if it came with a 2 or even 3 meter long cable, since it’s obvious that people will need to connect this behind their gaming station, and some of us are running out of power outlets that are directly behind the TV. Yes, there are third party power bricks, I covered them in this article, but I can’t say that I’m happy about another $30 on top. 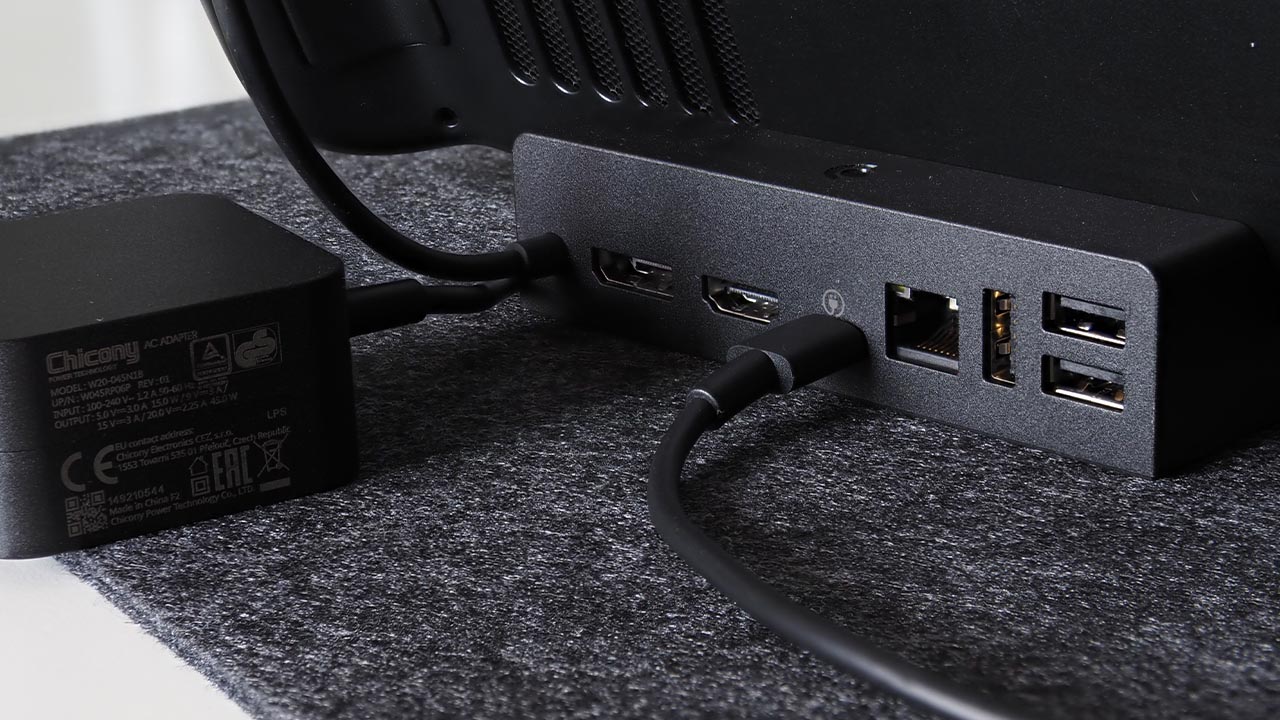 The charging brick is the same one you get with the console.

Second, although we got a passthrough USB-C connection on the back, you would still need to get additional adapters to connect your Samsung T5, or any other of the USB-C SSD’s compatible with the Steam Deck. Some of them do come with a USB-C to USB-A adapters by default, but if you’re an idiot like me, you probably lost them somewhere.

Third, and this one might be far fetched, I would like to have more grams in the dock itself. I think that the sweet spot would be around 150 grams, that way even the more rugged HDMI cables wouldn’t twist or rise the dock, which would be cool for users like me who like chunkier cables.

Fourth, which might just be my lazy ass talking here, but hear me out. Since the console is on its belly, this means that you can’t access the Steam Deck SD Card slot easily. If you’ve followed my DIY Steam Deck SD Card Sticker project, you might already know that I have a collection of them, which means that I’m switching the cards often. Because of that, I think it would be much more convenient if either the dock would have a frontal SD card reader, or if the Steam Deck itself would have one on top. But again, this might just be my lazy ass talking here.

The official docking solution for the Steam Deck looks and feels like it was designed to fit the console as perfect as it can get. I would also go that far to say that it looks like an evergreen product. If there’s a second iteration of the console, you’ll definitely be able to use the first gen Steam Deck dock to host it.

I already said it in the start of the review, with the few caveats aside, the official Steam Deck dock is a pleasant surprise. Not only is the availability great, you’re also getting a neatly designed gadget that fits the Steam Deck ecosystem like a glove. If you’re looking for a compatible dock and have money to spare, the official option is currently the best.