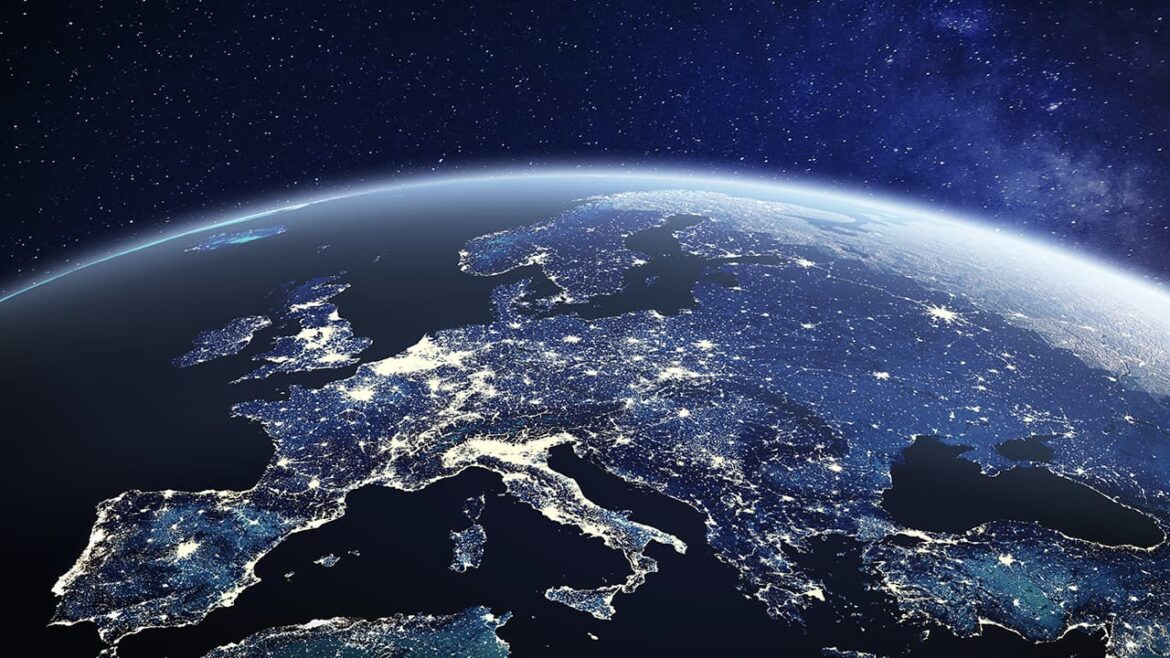 There has never been a better time in history for moving to a new country. Thanks to advances in technology and great wi-fi, you can go anywhere you want in the world and still stay connected with the people,  games, t.v. shows, and other online content you love.

Whether you’re a desktop gamer, laptop gamer, mobile gamer, or you’re just looking to live the digital nomad life, there is nothing more important than a good internet connection. But with that criteria in mind, where is the best place to move to?

According to authoritative sources like Speedtest.net that measure fixed broadband speeds, the country with the best ping in 2021 is Romania, a beautiful country with even more beautiful internet stats. Before you pack up your laptop, though, here’s a look at Romania’s numbers, as well as the nine other EU countries with the fastest broadband internet speeds.

Home to Transylvania, the birthplace of Bram Stoker’s Dracula, Romania is located on the shores of the Black Sea. It is filled with stunning landscapes, impressive, imposing castles, and a deep, rich culture that will keep travel enthusiasts and history buffs mesmerized. It is a great place for foreigners to settle, as they are often welcomed with open arms by the locals, who usually try their best to make them feel at home. The most common complaint from expats here is that some cities are overcrowded and there isn’t a lot of international food selection in stores.

The cost of living in Romania has been going up in recent years, but it is still one of the more affordable EU countries to live in. Jobs tend to pay well, and one can reasonably live on 1,000 euros per month. As if that weren’t enough to convince you, Romania is also third in the world when it comes to 4G speed, so you’ll never have any problems keeping in touch with loved ones back home.

Judging by broadband internet speed alone, Romania has the best latency on this list: just 5 ms. It’s no surprise, then, that the country is the home base for several esports players who earn hundreds of thousands of euros per year — or even millions.

The people of Denmark are said to be some of the happiest people on Earth thanks in part to things like tuition-free college and free public health care. There is very little crime here and a huge sense of community, making it a great place for social-minded people to move to.

No country is without flaws, though, and one of Denmark’s biggest drawbacks is its weather. While it’s normally on the milder side, winters can be cold and there are frequent storms — not to mention near-constant winds.

This blustery weather only serves to create a great atmosphere for gamers, though, because there is nothing like staying inside on a windy day and playing online with your friends. Perhaps this — plus its admirable 8 ms latency speed — is why Denmark was recently named one of the biggest countries in the world for esports, with over 43 percent of Danes getting in on the gaming action in 2018. The country is also home to N0tail, a.k.a. Johan Sundstein, the highest-paid esports player in the world, who has reportedly earned over $6.97 million USD as of March 2021.

Located on the Iberian Peninsula, Spain is a country full of art, history, and a unique culture you can’t find anywhere else. It is the second-largest country in the European Union, and is actually its own kingdom. The cost of living here is lower than some other European countries, but its rent is a bit higher. You may also run into tax issues as well if you make your money in another country, especially the U.S., so if you are a digital nomad who works online, you have to pay close attention to the laws.

You should also pay attention to Spain’s ping, as it is the highest (a.k.a. worst) on our list at 13 ms. But, that doesn’t prevent players like Daniel “Goga” Romero from making hundreds of thousands of euros in esports tournaments!

With a ping of 6 ms, Luxembourg is a formidable player on this list. It is also world-renowned for its wine… oh yeah, and it’s the second-richest country in the world. While it originally gained its wealth it the steel industry, Luxembourg is now focused on finance and private banking. Residents receive free public health care, and the country as a whole is considered to be one of the safest in the world. To live in the lap of luxury, though, there is always a price tag. The cost of living is high, and the weather is gloomy for much of the year.

But that’s not a problem for techies though, because they can use those grey days to stay inside enjoying online gaming or streaming videos!

With a latency speed of 6ms, Sweden’s ping is just as good as Luxembourg’s. Sweden is also known for its extremely affordable education system (free if you’re Swedish or an EU resident) and its great working conditions, albeit a slightly high cost of living. Sweden has some of the fastest internet in the world, but while most homes in the country have access to it, there are some dead spots in certain areas of the country where you can’t get a signal at all. This doesn’t stop it from being one of the highest-earning countries in esports, however, with top players easily earning hundreds of thousands of euros per year.

Portugal Has Good Ping but Lacks in Upload Speed

With a latency of 7 ms, Portugal’s ping is terrific for internet users. It is also a great place to live all around, thanks to its warm climate, low crime rate, and lower cost of living. One drawback of living in Portugal is that you will definitely have to learn some Portuguese. While most people you meet on the street or in stores are likely to know English, authorities in government agencies will speak only Portuguese.

But, with such a good internet connection, you’ll have no trouble finding an online course to take on the subject — if you’re not too busy playing Counter-Strike, the most popular online game in Portugal, that is.

Hungary’s low latency of just 9 ms earns it a spot on our list, but that’s not all the country has to offer. Hungary is one of the most affordable nations in the EU, with Budapest being only the world’s 48th most expensive city to live in. Public education and healthcare are often either affordable or free here as well, but you’ll have to know a bit of Hungarian to use them. Regardless of your language skills, Hungary is a great place for gamers. Preferred games here include League of Legends and Counter-Strike: Global Offensive.

The Netherlands Has Decent Stats

The Netherlands has an average latency of 10 ms, making it an ideal place for digital nomads. Nomads in general tend to be very happy here too, however, because the Dutch are a very welcoming people who strive for equality and a high quality of life. Sadly, though, the cost of living here is more expensive than much of the rest of Europe (and the world). But it is also said to have some of the highest employment rates as well.

Many Dutch esports players scoff at things like high cost of living, however: Dave “Rojo” Jong,” for instance, has made well over a million dollars playing Fortnite. Not too shabby!

France Is Our Most Improved Player

In addition to being famous for l’amour, France is home to some of the most elegant cuisine in the world. Foodies and lovers of love can make a great life here, even if the cost of living is a bit on the high side. Over the past few years, France has been working hard to become a big player in the broadband arena. It even made a special program, France Très Haut Débit, to guarantee lower latency and higher speeds by 2020. With a latency of 12 Mbps as of November 2021, it still has a ways to go, but it is certainly getting there.

If the country needs even more motivation to improve its internet speeds, it only has to look at its top esports players: Sebastien Debs, a.k.a. Ceb, has earned over €5,000,000 playing Dota 2 online, making him the fourth-highest earner in the world. That kind of success is surely worth supporting!

Last but not least, we have Malta. Thanks to its stunning coastline, its warm waters, and its nearly year-round sunny weather, Malta is at the top of many travelers’ lists. For those coming here to stay, Malta’s cost of living is a bit high, with everyday things like groceries and beer at the pub costing more than in some other countries. Rent tends to be relatively affordable for most, however, and jobs aren’t too tough to find.

The igaming industry in particular has really been ramping up in recent years, with international companies hiring many new workers. Malta is a big player in the esports arena as well, with top players earning nearly €45,000 in the past year. Fortunately, Malta’s latency speed is just 8 ms, so it can keep up with the demand for all this gaming.

How Do Other Countries Hold Up With the Technology?

Not every European country made this list, but we do have a few honorable mentions to make!

Scandinavian countries are in the lead for our runner-ups, with Norway seeing latency speeds of just 6 ms. This makes it a great place for esports, as Emil “Nyhrox” Bergquist Pedersen could tell you, seeing as he has made over $1.5 million playing Fortnite in the last three years.

Germany has an even greater gaming culture, which is reflected in the annual Gamescon trade fair held in Cologne, where gaming culture is celebrated and new technology is always introduced.  Unfortunately, Germany’s infrastructure just isn’t there yet to give it the speeds it needs to make it onto our list, but big improvements are expected to be made before 2025 to improve its internet connections and speeds.

Poland is also dedicated to better internet, and was even the host of the European Internet Governance Forum in 2021.

Liechtenstein has a kind of amazing average download speed of 211.26 mbps, which makes it the fastest in the world. It is also one of the richest countries in the world per capita, and its government has invested heavily in its telecommunications infrastructure. It aims to be fully fiber optic by 2022, and it is making great progress toward this goal, so we may see it on a similar list in the future.

Which EU Country Is the Worst in Terms of Internet Speed and Latency?

Although there are plenty of great things to do in Greece, it’s one of the worst places for internet speeds in the entire European Union. Coming in at just 31.85 Mbps, its download speed isn’t really ideal for esports or other online gaming. Its latency doesn’t help much either at 15 ms, and its upload speed is just sad at 4.93.

But frustration over slow broadband could be just the excuse you need to get out and go explore the country, which is cool too, I guess, if you’re into that sort of thing.

If not, Romania should be your first choice for staying connected abroad, even if there are also a lot of other great options on this list.