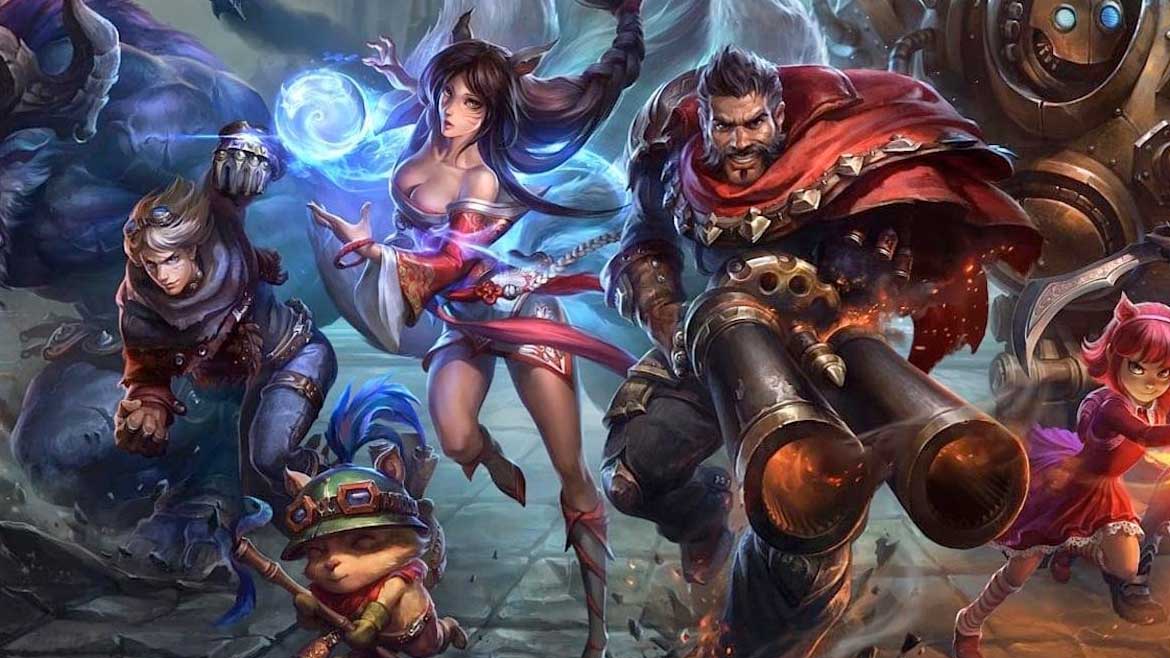 League of Legends is a grueling game where every decision you make can have consequences; some will bring you closer to the victory screen, while others will leave you… well, staring at the gray screen of death. But the decision-making process doesn’t just begin in the match itself. It actually begins in champ select.

Yep. Even your champion pick can determine the outcome of a match. There are certain champions that are consistently strong in the meta, have good win rates, and can be reliably picked into virtually any comp. Adding one of these champions to your rota is sure to help you accumulate LP in the long run.

Champions That’ll Help You Carry Hard: A Close Look at Each Role

With over 160 champions in League of Legends, it can be difficult to know which ones are worth adding to your roster. Here, we’ve narrowed down the best champions in each role based on the following criteria:

The Best Top Laners in League of Legends

The top lane usually consists of champions that excel at split pushing, dueling, or tanking the brunt of the enemy’s damage. The top lane is more isolated than other roles, but you can have a huge impact in the later stages of the game with effective rotating and wave management.

Darius (the Hand of Noxus)

Darius is a snowballing juggernaut who can whittle down his opponent’s health bar in mere seconds. He excels at trading and is insanely oppressive in the laning phase thanks to his sustain, high early damage output, and bleed passive. When Darius is ahead, he can effortlessly create gamechanging pressure, whether by split pushing or battling it out with his team.

Darius’ kit is also ideal for beginners. He doesn’t have any complex skillshots and his ultimate is essentially a point and click execute. His passive is easy to get to grips with – you just have to hit the enemy 5 times — and even comes with a nifty visual indicator.

Shen (the Eye of Twilight)

Shen might not do the most damage out there, but his kit is still a force to be reckoned with. His ultimate enables him to apply gamechanging, global pressure, turn losing battles into victories, and catch out overextended opponents with ease. Plus, his kit is stocked full of CC, shields, and mobility, which allows him to stay safe in laning phase, even if he falls behind.

Shen is also rarely seen in Ranked Solo/Duo, meaning you can main him without having to fear autofill. Currently, he’s sitting at a 4.3% pick rate and 0.8% ban rate. And even if you do get autofilled? Shen is versatile enough to be played in other roles too, like support or jungle.

Since his rework back in 2019, Mordekaiser has been showing the Rift why the top lane is his own personal island. He can control the pace of the lane effortlessly thanks to his hefty damage, good sustain, and unrivaled dueling potential. Once he hits level 6, he can even isolate his targets and drag them into an inescapable (and likely unwinnable) 1vs1.

Morde’s ultimate is also great in skirmishes too; he can pick off the enemy’s ADC to turn the fight in his team’s favor. Plus, his kit is easy to learn and doesn’t require heaps of mechanical skill.

Supports are champions with one goal in mind: to help their teammates get ahead. They achieve this in several different ways, from providing life-saving buffs and shielding, to securing vision across the map.

Blitzcrank is considered an S+ tier support champion for a reason; he’s a CC-loaded robot that can literally pull his enemies into their demise. His hook has plenty of playmaking potential, and allows him to invade, get picks, or throw off a team’s positioning with ease.

Blitzcrank particularly excels against immobile champions who don’t have the means to escape his CC. Thanks to his W movement speed, he also has great roaming potential, especially when paired with mobility boots.

Soraka is famous for her undying love for bananas — shoutout to Order of the Banana — however, she’s not on this list because of her dedication to her five a day. It’s because of her insane amount of healing; her W is a point and click heal, her Q grants her health if she hits a target, and her R is a global heal that applies to every living ally. She can counter bursts and help her teammates stay alive long enough to dish out the damage in fights.

Aside from her healing, Soraka has plenty of other aspects that make her a good, all-round pick; she can reach vulnerable allies quickly thanks to her passive, and her E allows her to silence and root champions. Plus, she’s rarely banned and her kit is easy to master.

Unlike other support champions, Renata doesn’t take a backseat in the lane. She’s bursting with style and tons of damage. She can aggressively dominate the lane with her long-ranged poke, excellent skirmish potential, and punishing CC. She can even buff up her allies and provide hefty shielding, giving her excellent synergy with ADCs like Kog’Maw, Vayne, and Twitch.

To top it all off, Renata has one of the most powerful abilities in the game; she can revive dead allies and let them have a second chance at winning the fight. Renata isn’t the easiest to master, but her kit is designed for carrying and she scales well.

ADCs are the damage dealers of the team. Although squishy, they can take down opponent after opponent if left to their own devices.

Miss Fortune is a gunslinger with a whole lot of early game firepower. She can dominate her laning phase and leave the enemy at the mercy of her poke, slows, and health bar-bursting Q.

Her ultimate — where she channels a barrage of bullets — is also extremely useful in teamfights. When positioned effectively, it can destroy multiple targets at a time. You can even use the ability to force the enemy to back off from objectives. Plus, Miss Fortune’s W passive grants bonus movement speed. This allows her to roam with ease and can help with kiting (as long as she doesn’t get hit).

While most ADCs lack mobility and gap closers to chase down stragglers, Tristana is a whole different story. Thanks to her W, she boasts an insane amount of mobility and can jump straight into a fight to easily land the killing blow. She can also use this ability to disengage safely, allowing her to escape ganks, unfavorable fights, and kite effectively. Plus,  her AoE bomb ability allows her to push out minion waves (and take turrets) quickly.

While Ashe doesn’t dish out the most damage, her kit remains useful no matter the stage of the match. She can keep her enemies at bay with her auto-attack slow, provide gamechanging vision with her E, and also assist other lanes with her global stun.

Ashe’s kit is also tailored to beginners; her mechanics are pretty simple and every ability is easy to get to grips with.

The jungle role is considered to be the most impactful role in the game. It involves making around the map plays, farming monster camps, and securing objectives such as drakes and Baron.

Master Yi might have some of the most zen voice lines in the game, but his playstyle is anything but that; he can slash through his enemies’ health bars at the click of a button. He can 1vs1 virtually any champion when ahead, and his alpha strike ability allows him to chase down targets and dodge burst damage. Master Yi also has a strong jungle clear and simple mechanics, which will allow you to focus on the macro side of the game.

Volibear is a champion where “jack of all trades, master of none” doesn’t apply. He excels at ganking, can tank the brunt of the enemy team’s fire power, and can even clear jungle camps quickly. Plus, thanks to his ultimate, he can disable enemy turrets and pull off dives with little to no risk involved. His mobility is pretty solid too.

Another great aspect of Volibear is his versatility; he can easily be played in both the top and jungle roles.

While requiring more mechanical skill, Elise is worth the practice if you want to hard carry. She has an aggressive, mobile playstyle that allows her to treat the enemy’s jungle as her own and easily secure picks on stragglers. She also reaches her powerspike early on, which lets her start one-shotting enemies left, right, and center before they can even build defenses.

But what makes Elise truly S+ material? The fact that she can all-in without the fear of punishment; her E allows her to avoid CC and disengage safely.

The mid laner is the soul of the team; the optimal lane position enables them to support their allies around the map, whether by ganking lanes, assisting with objectives, or invading. Mid laners also deal a lot of damage and can make a huge impact in fights.

Vladimir strikes fear in most LoL players’ hearts. While he’s weak early, he scales insanely well and can one shot any champion that dares get close in the later stages of the game. His AoE ultimate, combined with his high sustain, is also incredibly oppressive in teamfights.

Plus, Vladimir can transform into an untargetable blood pool, which allows him to easily disengage from unfavorable situations or escape from even the most well-planned out ganks.

Annie is considered one of the most reliable mid laners in the game. She’s at a spot in the meta where she remains strong, but never strong enough to be buffed or nerfed to oblivion. She also doesn’t have a high ban and pick rate.

As a champion, she’s a great mage for beginners. Her kit is mechanically simple and the win condition is easy to understand: land your stun combo, and Tibbers will do the rest.

Vex is a champion for those looking to hard carry. She can clear waves fast once she hits her powerspike and packs an insane amount of burst damage. Thanks to her long-ranged ultimate, she can also roam around the map and reach skirmishes with ease.

Plus, Vex hard counters mobility. This makes her an incredibly strong pick against frequently played, mobile mid laners like Yasuo, Ahri, and Yone.

MoCA Adapters and Their Effective use in Gaming