Discussing Electricity Costs – How Much Power Does a Gaming PC Use? 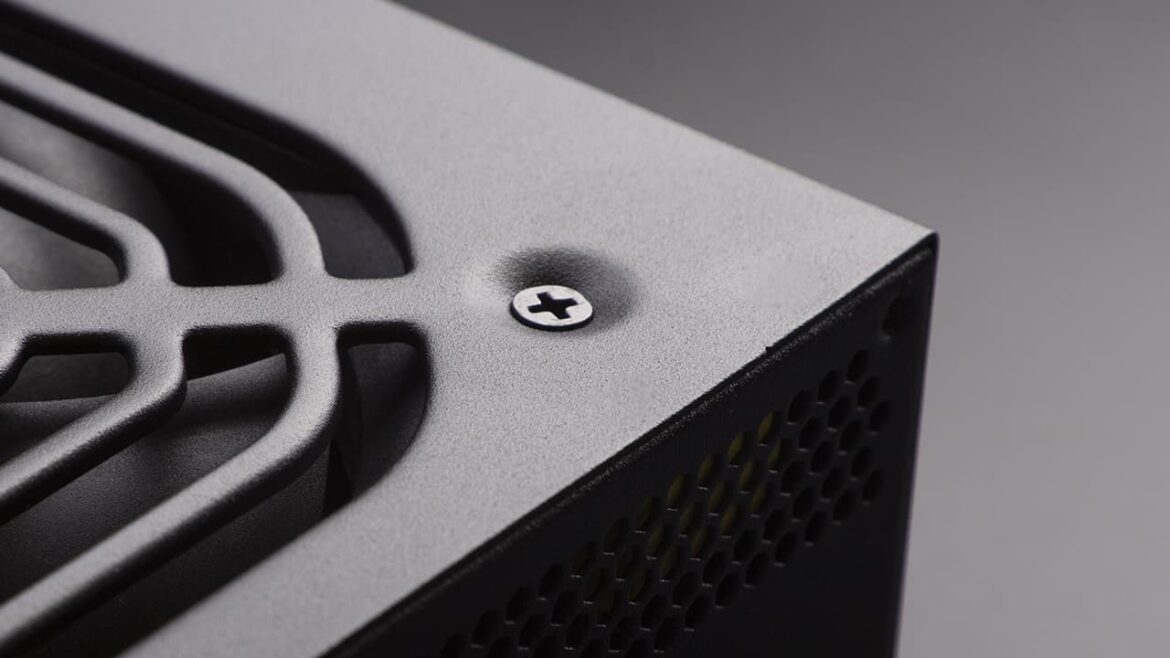 As esports enthusiasts and casual gamers at heart, we are an inch away from being clinically diagnosed as Gadget Hoarders. Someone who’s outside of our industry would say that one gaming PC is enough… But what about various consoles, tablets and phones that are out there? Or even Valve’s latest Steam Deck, the pinnacle of bathroom breaks. Surely there’s an exception to the rule, right?

Well, we gonna leave that question to our Jasmine to answer in one of her future articles on esports health, and until then we’re going to face the cold, harsh truth; that gadget plethora you own inflates your monthly expenses, with the most egregious sponge being your gaming PC.

Because of this reason we decided to create a guide through which we’re going to explain you how to calculate the expenses around your PC, including some tools and apps that could help you on your cost saving journey.

So, let’s jump in to our guide on how much power does a gaming PC use and see what are the exact numbers one can expect.

The Definition of a Gaming PC in 2023

When it comes to desktop computers, you basically have three options; either you’re going to build it by yourself, let someone else build it for you, or buy a pre-built gaming PC. Whatever the scenario is, you’ll most likely end up with an almost same portfolio of components.

Don’t forget that these two PCs are just examples of what a high-end DIY and prebuilt gaming PC might look like. The PC gaming hardware market includes a plethora of different parts and each configuration is different when it comes to the energy consumption, which brings us to the second point – there are power calculators that you can use before you purchase a computer.

These nifty online tools are made to quickly and (fairly accurately, but still with a grain of salt) calculate the wattage of any PC build. Instead of manually searching power specs for each individual component, you can use the said PC power calculator and just insert components from your build instead. We said “fairly accurately” for a reason, because besides them, you can also calculate the real level of power consumption through tools like power meter plugs, but we’ll touch upon that later.

The power calculator used for this guide is the OuterVision Power Supply Calculator. We picked this one because it includes the most detailed list of components. It comes in Basic and Expert versions, making it great both for newbies and experienced PC builders.

How to Calculate the Power Consumption of Your Gaming PC

To get the most accurate result regarding your PC’s wattage you need to know the detailed hardware spec of your PC. While you can find your specs directly in Windows we recommend CPU-Z, the legendary app for listing PC specs. All you need to do is download the app, run it, and then collect the data from different tabs. As our example, we’re going to use Alienware’s Aurora R10 gaming PC that features the following components:

Finally, the common consensus is that power supplies found in Alienware PCs are pretty good, so we will assume the PSU in this PC fulfills the 80 Plus Gold efficiency certification.

You can find your PSU’s 80 Plus certification either by checking the PSU itself or by searching online. Note that you don’t need the wattage of your power supply unit, just its efficiency certification. With that said, for the sole purpose of calculating the wattage of your PC you don’t need the specs of your power supply at all.

As for the motherboard, you don’t need to know the exact model. The only thing you should know is whether your motherboard comes in regular (ATX or Micro ATX) or Mini-ITX size, we discussed the difference between them in this article.

Now that we have the specs let’s do the calculation. From our side we’re using the Expert version of the tool but you can use the Basic version as well. 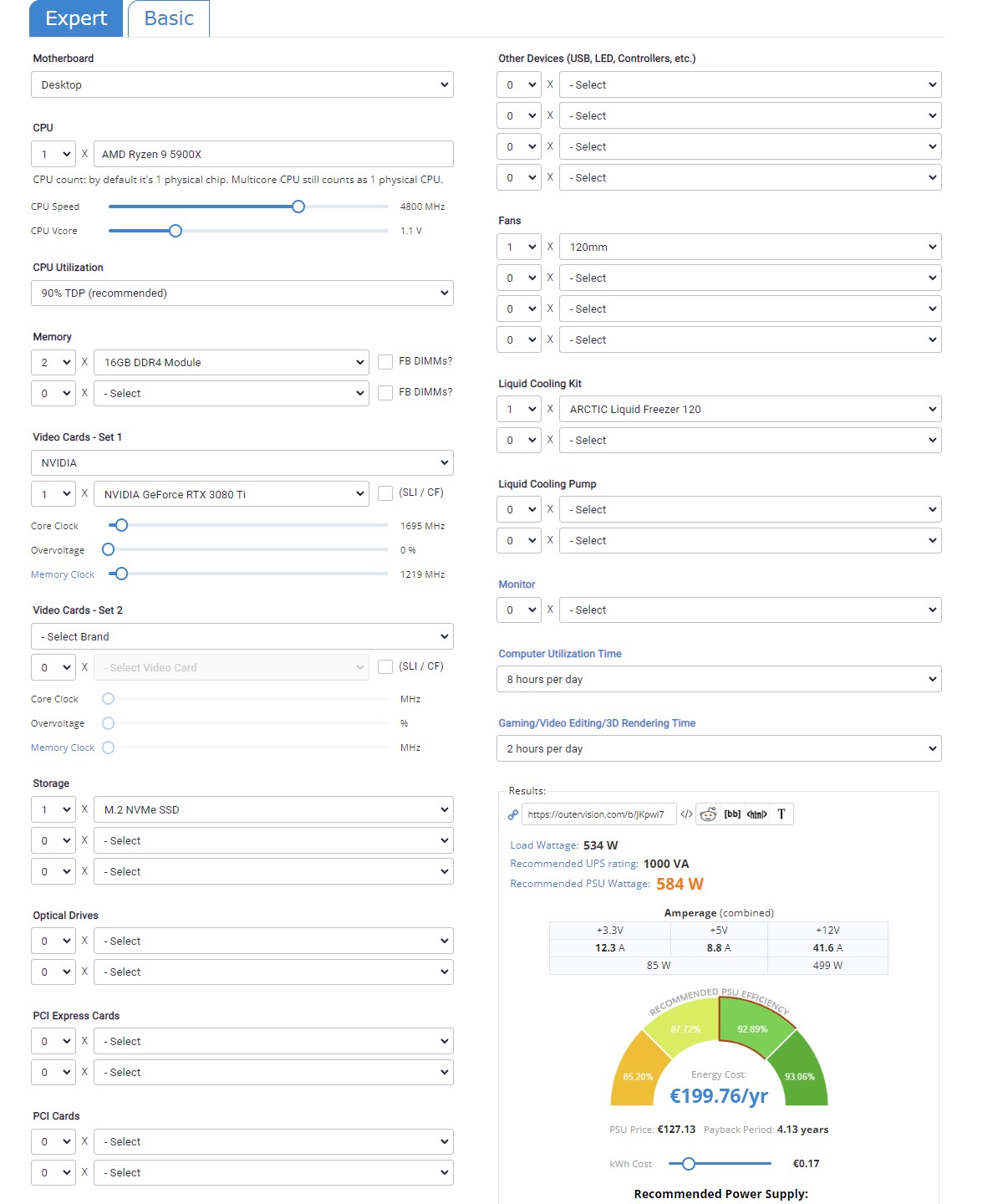 As you can see above, in the end we got a maximum load of 534W. In conclusion, a high-end gaming PC uses about 500-550W of power at maximum load.

Note that this number is the maximum possible load. Your PC will hardly reach that wattage when running older and less demanding games, and even less energy when you’re just browsing the internet of listening to Spotify. Now that we know how much power an average high-end PC uses, let’s calculate the electricity cost of such a PC by using online electricity calculators.

Electricity Calculators and How to Calculate the Total Cost

The US government Appliance Energy Calculator

For this exercise we opened up the official US Gov Calculator and selected Computer-Desktop PC as our appliance.

Next, we’re entering the wattage that we got in the previous step, which is 534W, and after that you would need to pick the utility rate of the state you’re in. For our example, we’re going to go with the US average set at 12 cents per kWh.

As for hours used, we’re including two types of gamers here; a casual one that spends an average of two hours per day gaming, and an esports enthusiasts who spends six hours per day. On top of that, we’re going to say that your PC is being used throughout the whole year, so 365 days. 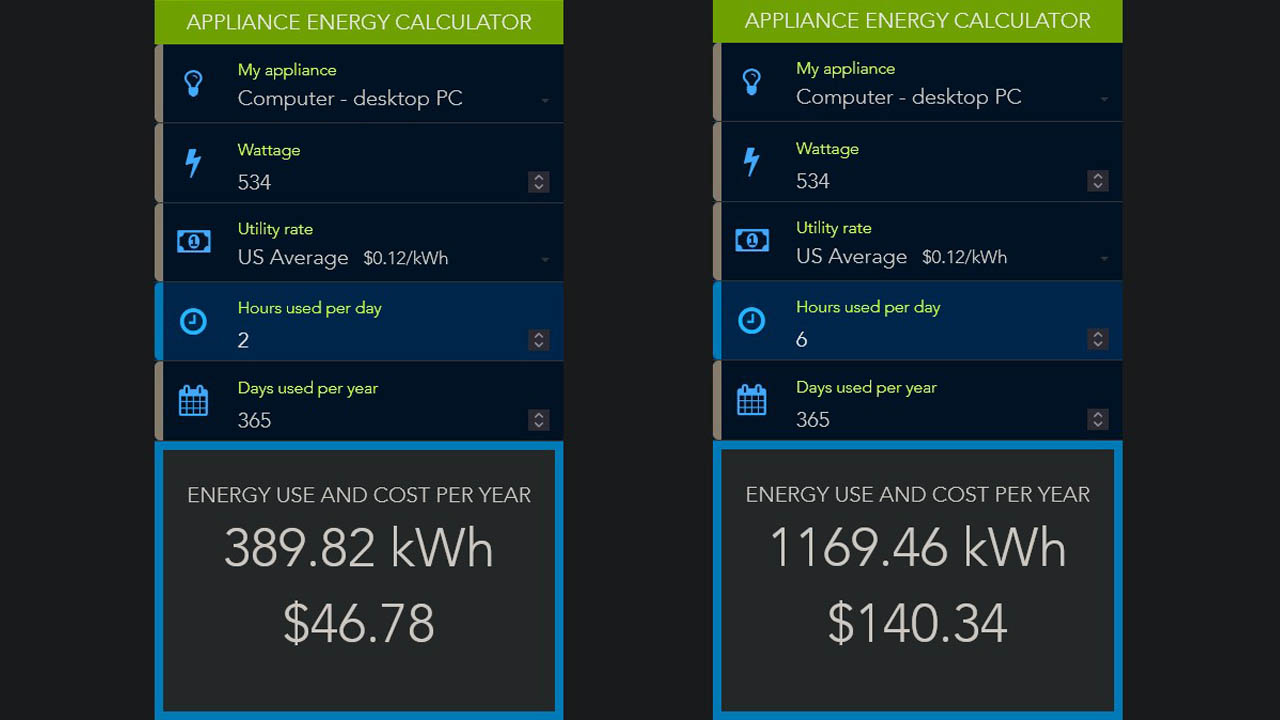 The casual gamer is on the left, while the enthusiast is on the right.

Our results show that, if you play games two hours a day on our Alienware PC you will pay around $47 per year. If you’re a hardcore gamer your yearly cost of using the PC is around $140. The difference, as you can see, is easy to calculate even further, since one hour per day would cost you around $24 per year, so according to that number you can easily calculate your own daily spend. Now on to the second tool.

The RapidTables.com Cost Calculator for EU and Other Countries

If you’re residing in the EU you can expect your expenses being a tad higher than the US, mainly because of the recent tensions between some countries. This time we used RapidTables.com to get the total calculations and changed the electricity cost to the EU average of 28.5 cents. The results show 2 hours of gaming will cost you around $111 a year, while the esports enthusiasts cost went up to $333.

The casual gamer is once again on the left, while the enthusiast on the right.

Note that these results don’t paint the whole picture. For instance, we had to use the maximum possible wattage for the calculation. Also, we only included hours spent gaming. Most PCs work much longer than this, spending much less power since they’re either idling or used for light work such as browsing or watching videos. If you want to get the most accurate reading of your PC’s wattage during light usage and gaming, you will need to use a power meter plug.

How to Calculate PC Power Usage With a Power Meter Plug

Power meter plugs are handy little devices that can measure your PC power directly from the wall, just hook one to your wall socket, connect it to your PC’s power cable and you’re set. The device will show you real-time power usage and many models can also show just how much electric power your appliance uses during one hour or one day. If you don’t own one, we would recommend to check out our guide on the best power meter plugs, there we discussed the exact models and pricing.

To get the most accurate results, perform two types of tests. The first one should include browsing the web, listening to podcasts or watching videos, record the numbers you’re getting from the power meter plug.

The second test should include running graphically intensive tasks capable of sweating both your CPU and GPU. For gaming tests we recommend Cyberpunk 2077 or the recently released Spider-Man Remastered with ray tracing effects. If your GPU doesn’t support ray tracing, use a Battlefield 2042 128-player match, Shadow of the Tomb Raider, or the recent Total War games.

If you want to try running benchmarks, you can do that as well, with the most popular ones being 3DMark and Cinebench. We wrote more about them in this article: Best Benchmark Software for Gaming PC’s

Once done, include both readings in the electricity calculator of your choice. First enter the light workload wattage, enter the average number of hours you’re using your PC in such a way and then do the same with the gaming wattage reading.

By doing that, you’ll get the most accurate readings, and if you want to geek out completely, you can also track your daily spend through the power meter plug and record it in to an excel, and then at the end of the year calculate the exact numbers.

Use This Info to Your Advantage

As you can see, calculating your gaming PC power usage is fairly simple. The most complex task is finding the detailed specs of your PC, everything after that is just simple math.

In our opinion, the best thing you can do with this info is make use of it before you buy a new gadget. Not only can you calculate and compare cost differences between various components, you can also make sure that the “gaming fridge” you’re planning to buy will not spend more energy than the PC itself.