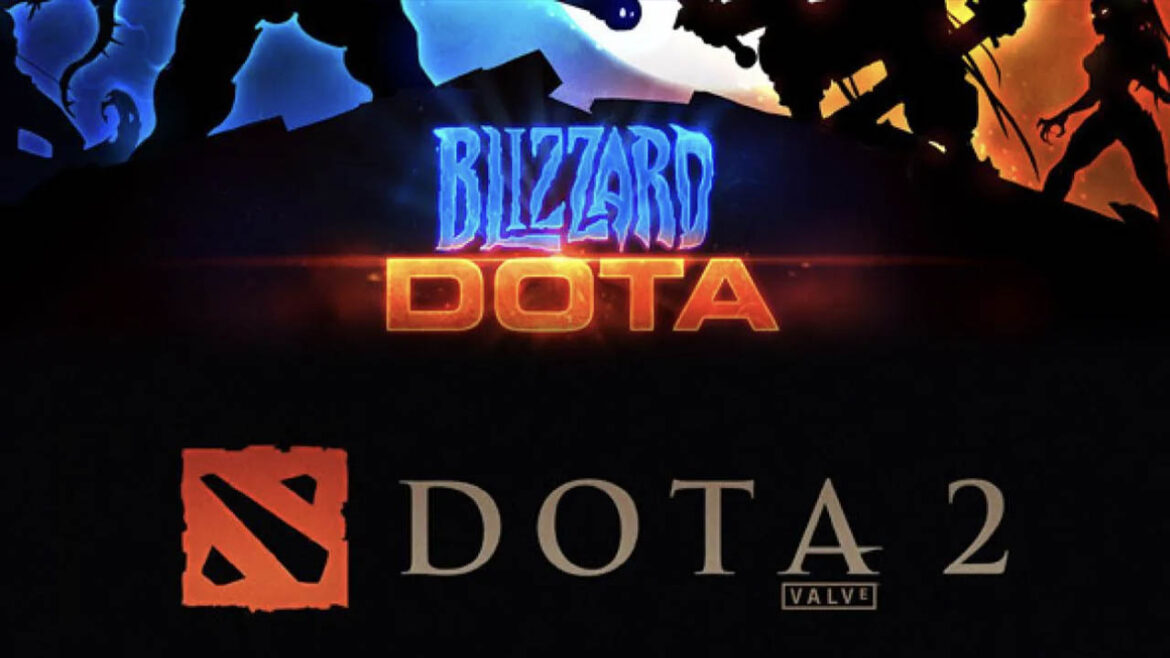 One of the weirdest microcasms in gaming has always been the weird world of early MoBA’s. Defense of the Ancients (DotA) League of Legends (LoL) and Heroes of Newerth all spawned from a Mod made by a frozen frog, and possible backstabs/betrayal. Even with everything that’s happened since, we need to remember that it all started with Warcraft 3.

Wait. Why Would Blizzard Own Dota 2?

Starting from the beginning. DotA (not Dota 2) was a custom map made in the Warcraft 3 custom maps engine. All of the heroes and assets within DotA were from Warcraft 3. In some cases this was a model being used for a different character (ie: Illidan was Antimage) in others it was a essentially a direct 1:1 version of the character from Warcraft (Windrunner being Sylvannas Windrunner or Necrolyte being a Necrolyte.)

This meant that DotA, a game so massive that it spawned a genre, existed entirely within another game. The origin point of MOBA’s used Blizzard used that game’s IP and characters. By all definitions, DotA was a mod to Warcraft, and technically Blizzard could have shut it down at any time they wanted to, but why would they? Afterallm it was bringing thousands of players to Warcraft 3. So, Blizzard had a gigantically successful custom map within Warcraft that would go on to inspire some of the biggest games on the planet. Now that we are caught up, we can talk about…

DotA started back in the early 2000’s in the hands of Kyle “Eul” Sommer, who modern Dota 2 fans will recognize from the in-game item, Eul’s Scepter.  This original version of DotA had it’s a shockingly complete first draft for MOBAs, and had many of the core elements we know and love today. Eul ended up stepping away from the map shortly after creating it and giving the reins of the community. At this point, many different creators tried their hand at making a version of DotA, but the version of the map that would truly take off would be DotA: All Stars made by Steve “Guinsoo” Feak. After this point, DotA and DotA: All Stars are essentially synonymous.

Guinsoo took over for a long time before the reins passed onto the, anonymous by choice, Icefrog.  The designer that people now associate with DotA because he’s been it’s primary designer since 2005, a hilariously long time.

Guinsoo would move onto a little game called League of Legends by Riot Games (Guinsoo’s Rageblade!) alongside Pendragon the owner of a popular DotA fansite. This is part of the aforementioned potential backstabbing (namely that DotA’s main site was taken down for a League of Legends ad that slandered DotA, but this article isn’t about that.)

Icefrog, was now the primary creator of DotA:All-Stars and began bringing in an era of balance that was primed to foster esports-like competition. During this era, Icefrog began looking to get DotA off of Warcraft 3, likely pushed by the official releases of competitors like League of Legends and Heroes of Newerth. DotA had a minor esports scene despite being a simple mod, but with sharks circling it was clear that the game needed to jump off Warcraft 3 for its own engine, or it would become an artifact of gaming history.

In 2009 Icefrog revealed that he had teamed up with Valve for something that would later be revealed as Dota 2. Yes, Dota 2 not DotA 2, Blizzard owns the rights to the complete name Defense of the Ancients as of 2012 so Valve’s version is just Dota 2, not an acronym. This level of legal minutia we’re talking about.

When they’d worked on their own games, Guinsoo, Pendragon (League of Legends) and others had avoided poking the Blizzard bear by staying away from the core of DotA that was beholden to Blizzard’s custom map maker clauses. Namely that the custom map maker’s user agreement gives Blizzard the right to content created on their engine. Blizzard could make the argument that DotA was Blizzard Intellectual Property and that Valve had no right to make a sequel to a Blizzard game.

This actually happened back when Valve attempted to file for the DOTA name.

Before the release of Dota 2, Valve did what every company does and tried to register the trademark for the DotA name, after all, they were investing millions into making a game and needed to protect their investment. This set Blizzard on the warpath and into the courtroom in a countersuit over the DotA name and IP. Blizzard’s claim was essentially that Blizzard had been hosting the game for years, had given out permissions and licenses for the name in the past for everything from events to the viral Basshunter song Dota. Blizzard’s previous handling of the IP could make it so fans considered DotA a Blizzard property, making it impossible for Valve to take over the name.

This wasn’t even the first time that Valve had been taken to court over Dota 2.  Steve ‘Pendragon’ Mascon, the creator of DotaAllStars.com had already taken Valve to court over the DotA name to “protect the work that dozens of authors have done to create the game.” Attempting the claim the DotA under the banner of his previous website www.dotaallstars.com, which had been defunct for years after Pendragon himself took it down for a League of Legends ad. Valve won that court case.

“Valve has no right to the registration it seeks. If such registration is issued, it not only will damage Blizzard, but also the legions of Blizzard fans that have worked for years with Blizzard and its products, including by causing consumers to falsely believe that Valve’s products are affiliated, sponsored or endorsed by Blizzard and are related or connected to Warcraft III.”

To make it even more complicated, it was revealed that during the suit that Blizzard was working on ‘Blizzard DotA’ which would go on to be known as Heroes of the Storm. This meant that Blizzard wanted the name for their own project, which would not involve DotA Allstars primary creator, Icefrog.

Who Won the Valve vs Blizzard DotA Suit?

This wasn’t Valve’s first rodeo when it came to making Mod-Based games, seeing as their popular hat based fashion game Team Fortress 2 is based off of a Quake Mod. Whether this came up when Blizzard and Valve settled their differences out of court, we’ll never know.

On the release of Dota 2, a lot of things had changed from the original mod to help divorce it from it’s Blizzard origins. Characters’ had names changed, for example Nerubian Assassin became Nyx Assassin, Nerubian Weaver became Weaver, etc. Some of these changes still have legacy content in the Dota 2 community, with players calling Nature’s Prophet ‘Furion’ and IO’s ability descriptions calling them Wisp.

The most recent echo within Dota 2 of it’s lawsuit filled history is the name change for Necrolyte (Necrophos) and Windrunner (Windranger), both of which were deemed to be too close to Blizzard IP some time after the release of Dota 2.  They were small changes, and we haven’t seen anything similar since, but the lack of legal battle over the names shows that Blizzard and Valve are still talking behind the scenes to ensure that DotA and Dota 2 stay properly divorced in terms of IP.

What’s the Difference Between Windows 11 Home and Pro?